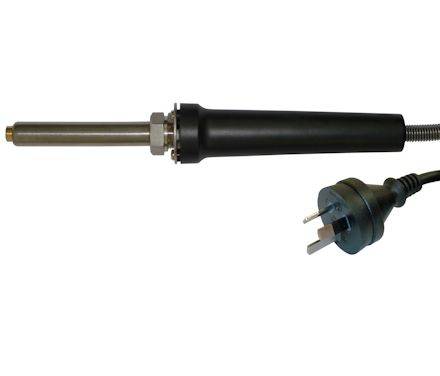 This is ceramic element assembly that comes with the ATVPRO kit, the KCWPRO kit and other Airless Plastic Welders with an Australian plug. The previous design had a Ni-Chrome wire that, like a light bulb, would seem to burn out at the most inopportune time.  This design, however, has a ceramic element that lasts WAY longer.  In fact, we put this element on our cycle-tester to see how long it would last.  The cycle tester would turn on the element for 30 minutes, then turn off the element for 30 minutes.  This cycle happened 24 times a day for 9 months (a total of 6,500 cycles) and the element never burned out.

We got tired of dealing with suppliers who said "this is what we have to offer.  Take it or leave it."  So, we started from scratch and designed our own.

As a reminder, this element has and Australian plug